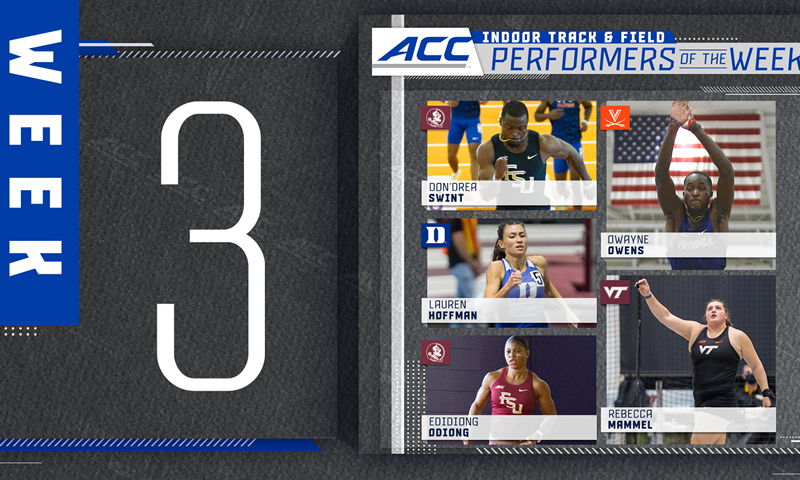 GREENSBORO, NC (theACC.com) – Two student-athletes who place No. 1 nationally in their respective events and three others who place in the top three have been recognized as Atlantic Coast Conference Indoor Track Performers of the Week for the January 18.

Swint’s time of 6.53 in the 60 meters led the field of 26 riders at the Clemson Invite and ranked third nationally. It scored a personal best for the Delray Beach, Fla., senior and is the third-highest mark in Florida State school history.

Odiong’s winning time of 23.34 led the field of 40 runners at the Clemson Invitational and is currently the No. 2 time in the nation and the No. 4 time in Florida State history. . Also ran a leg in the 4×400 relay team which currently sits fourth in the ACC (3:43.22).

Owens ranks No. 1 nationally in the triple jump after his mark of 16.23 meters (53’3”) at the Virginia Tech Invitational. Owens was the top middle schooler among a field of 14 competitors.

When she first met Virginia Tech, Rebecca Mammel showed why she is one of the most exciting shot putters in the country. Mammel’s five legal throws were over 20 yards, and his sixth-round effort increased to 22.15m (72′ 8″), good for the event win. Mammel’s throw ranks second overall from the NCAA this year, to the first in the ACC, and was just 0.18m from the 17-year-old school record at Virginia Tech.

Vizag’s most popular resorts along the coastline