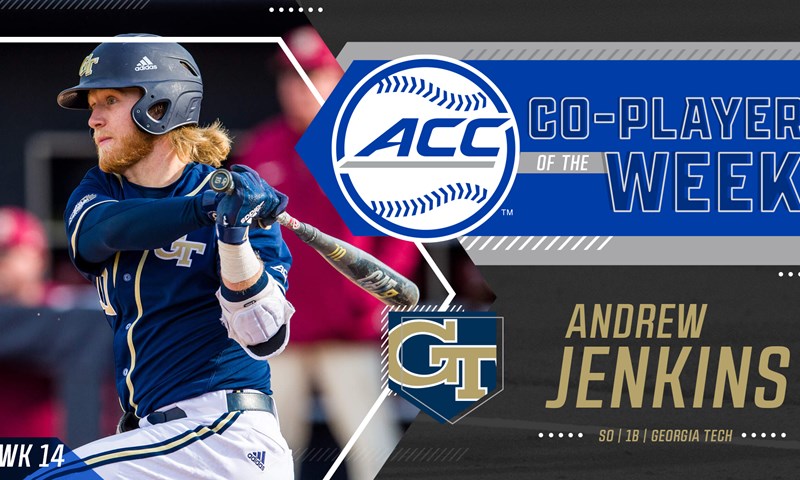 The ACC’s weekly honors were voted on by a select 15-member panel and announced on Mondays throughout the regular season. Monday’s recognition was the second of the day for Lowder, who was previously announced as the ACC pitcher of the year.

Jenkins led Georgia Tech to a five-game winning week, hitting .435 (10 for 23) with two doubles, four home runs and nine RBIs. The Atlanta native posted 23 no-out at-bats and recorded a .440 on-base percentage with two stolen bases. The sophomore hit a home run in the ninth inning of Game 1 against Pitt, catapulting the Yellow Jackets into a three-game sweep.

Virginia Tech’s Jones hit five homers and had eight RBIs to lead the No. 3 Hokies to four wins, including a three-game sweep of Duke that won the Coast Division title and the No. 1 seed in the ACC baseball championship. For the week, the native of Glen Allen, Va., hit .429 (6 for 14) and scored six runs. He amassed a 1,500 slugging percentage for the week while reaching base at a .529 clip.


Lowder set the tone for Wake Forest’s first-ever series sweep at Raleigh, throwing a complete gem to propel the Demon Deacons to an 8-2 victory at NC State on Thursday night. Lowder pitched the first full game by a Wake pitcher since 2017 on just 87 pitches, striking out six batters while allowing just five hits and no walks. Lowder (10-3) is one of seven ACC pitchers to go the distance this year and finished the regular season tied for the league lead in wins. Saharan dust clouds reach Florida and the Atlantic coast. What is that?