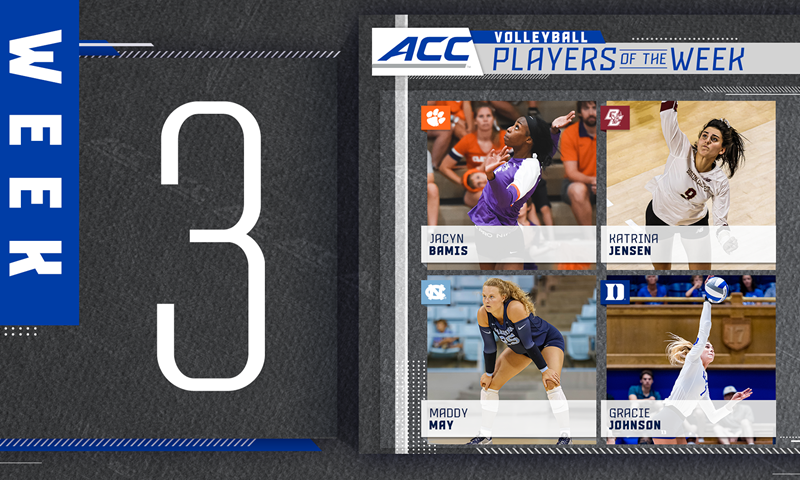 Jensen helped lead Boston College to the Rhode Island Invitational Championship, earning MVP honors as BC improved to 10-0, its best start in program history. A native of Temecula, Calif., Jensen averaged 4.5 kills per set and hit .350 for the week, while adding 10 digs and three blocks. In the win over LIU, she had 30 kills, the fifth-highest five-set kill tally in the country this season.

Johnson helped guide Duke to a 3-0 week, including a pair of wins over Big Ten opponents Michigan and Michigan State. A native of Virginia Beach, Va., Johnson had a career-high 28 kills and hit .389 in a 3-1 win over Michigan. His 28 kills are tied for fourth nationally in a four-set match. She also added 15 digs, six service aces and five blocks during the week. Johnson ranks third in the nation with 25 aces.

Bamis played a crucial role in Clemson’s first win over rival South Carolina State since 2014 as he tallied 11 blocks and four kills in a five-set victory. She finished the week with 18 error-free blocks and currently leads the team with 31 blocks. The Spokane, Washington native has started all four games this week and added 17 kills.

North Carolina’s May had a team-best 50 digs in the Tar Heels’ three competitions, which included a game-best 13 against Michigan State and 19 against Michigan. The Winterville, North Carolina native started the week with 18 digs in a win over Charlotte and then set a new career high with 19 against the Wolverines. She also had an ace on serve in each of the three games.

2022 ACC Volleyball Player of the Week

2022 ACC Volleyball Freshman of the Week