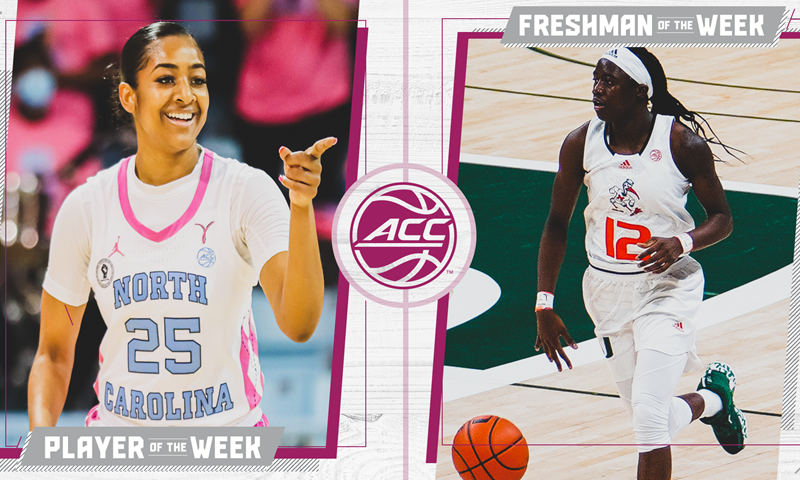 The ACC women’s basketball weekly awards are voted on by the league’s Blue Ribbon Panel.

Kelly averaged 22.0 points, 4.0 rebounds and 3.0 assists last week to lead the 18th-ranked Tar Heels to a pair of wins, including a home win over No. 3 Louisville . North Carolina earned its first-ever ACC win over the Cardinals last Thursday with a 66-65 victory behind Kelly’s 18 points and four rebounds. It was the first top-five win for UNC since 2019. Kelly’s jumper with 23 seconds left in the game proved to be the difference, giving the Tar Heels a one-point victory.

On Sunday, the San Antonio, Texas native led North Carolina to a 64-49 victory at Florida State. It was UNC’s first win over FSU since the 2014-15 season and Tallahassee’s first win since 2013-14. Kelly led all scorers with 26 points, shooting 9-15 from the field, with five assists and four rebounds.

Kelly has now had 20 or more points six times this season and ranks fourth in the ACC with 16.3 points per game.

Williams put in three strong performances to lead Miami to a perfect 3-0 week, highlighted by a 51-39 win over No. 16 Georgia Tech on Sunday. The freshman had eight points with six rebounds and four assists in a 71-55 victory for the Hurricanes at Virginia on Tuesday. She followed that outing with 11 points, six rebounds and two assists as Miami cruised to a 10-point victory over Pitt, 60-50.

A native of Pompano Beach, Fla., Williams scored six points in the win over the Yellow Jackets and was stellar defensively to help the Canes earn the season sweep over Georgia Tech.

For the week, she was perfect 5 for 5 from the free throw line and shot 10 for 23 from the floor.

ACC women’s basketball enters the final week of the regular season and action is set to return Thursday night, as Florida State hosts Georgia Tech at 6 p.m. and Notre Dame hosts Clemson in a doubleheader on ACC Network.