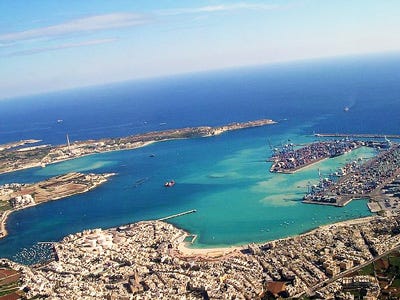 When you’re en route on a Navy vessel, there’s nothing like a port visit.

It is an opportunity to have some free time and to relax. You can get off the ship and stretch your legs. It’s also a great opportunity to experience another culture in all its glory.

Port tours are the reason many people enlist in the military in the first place. “Join the Navy, see the world.” I wanted to take a moment to share some of my favorites over the years.

To be honest, I haven’t seen a lot of ports. I’ve been deployed three times and have had countless little ones underway, but there are a ton of sailors who have more time at sea than me (including my younger brother).

All of my deployments came from the east coast and headed for the Persian Gulf. They involved 1 or 2 quick stops in the Mediterranean and then straight through the Suez Canal.

My next ship will be on the west coast, so I am delighted to have the opportunity to explore Asian and Australian ports in the future.

It’s worth mentioning that you aren’t necessarily looking for the same things on a port visit as you are on a family vacation. There are normally 2 things I try to accomplish on a port visit.

First of all, as a history buff, I like to experience the past of my destination. I like to visit Roman ruins and old castles.

Second, I like to find free time and relax. When you only have a few days in a new country, the options can be quite overwhelming. After the intense program of the past few weeks, sometimes the best thing to do is lie down on the beach with a cold drink.

That being said, here is a list of the places I have stopped on ships. You will see that the list is not huge, but there is quite a good variety. In the Mediterranean, I went to Rota * (Spain), Toulon (France), Augusta Bay (Sicily) (x2), Crete (x2), Malta, Haifa (Israel) and Marmaris (Turkey). In the Indian Ocean / Arabian Gulf, I have been to Seychelles, Jebel Ali / Dubai (x2) and Bahrain (x ~ 15). On my first ship, we took a month-long trip to the Caribbean where we visited Guantanamo Bay and St. Maarten. I also spent three weeks ashore in Djibouti, but that was for mission planning, so that doesn’t really matter. I might have missed a couple of them, but I think that’s it.

To be fair I enjoyed all of the tours to varying degrees but 3 stood out from the rest.

3. St. Maarten – This place is truly a tropical paradise in the Caribbean. Half of the island belongs to the Dutch while the other half is French.

We pulled over on the Dutch side, took an absolutely terrifying cab ride (now that I think about it, every cab ride I have done outside of the US has been terrifying) through the hills to French side where we had an excellent party in the square in a bungalow that has been rented.

I also remember walking along the pier and having to pay $ 4 for a bottle of water when I could have a beer for $ 1. Saint-Martin is probably most famous for its horrific airport which forces planes to approach directly over a crowded beach.

2. Malta – Malta is an island in the Mediterranean which has been considered to be strategically located. Therefore, throughout history it has been conquered by just about every great power in the history of Europe and North Africa. As a result, there is a huge amount of history that is easy to explore. For someone with a bachelor’s degree in medieval European history, it was a dream come true. Mdina is a walled medieval town where you can walk around and really feel the history. Watching old-fashioned glass blowing there might have been the highlight of the whole trip (except maybe sitting in a Scottish bar and watching a Maltese impersonator of Elvis sing songs by Johnny Cash).

1. Marmaris, Turkey – This was definitely my favorite port. On the first day, my friend and I walked around the market. I bought some really high quality leather jackets for the whole family. For dinner we ate some sort of meat on a stick which was absolutely awesome.

On the second day, we hired a water taxi for the whole day. We paid the owner / driver $ 200 (split between 8 people) to show us around the beautiful bay and show us some of the islands. We circled the lagoon all day, jumping in the water whenever we felt like it and headed to restaurants on the island whenever we were hungry. I had also burned several discs the day before to play on the boat’s sound system, including Bon Jovi’s greatest hits (perhaps the most powerful tool in the world). Turkey was the perfect combination of local history and relaxation that really makes for a great port visit. While I enjoyed all of my stops, this is the one I look back on most fondly. Hopefully my future deployments will take me to even more amazing places.

* Rota is actually west of the Strait of Gibraltar and therefore technically outside the Mediterranean.

The opinions expressed here do not represent the Ministry of Defense or its components.