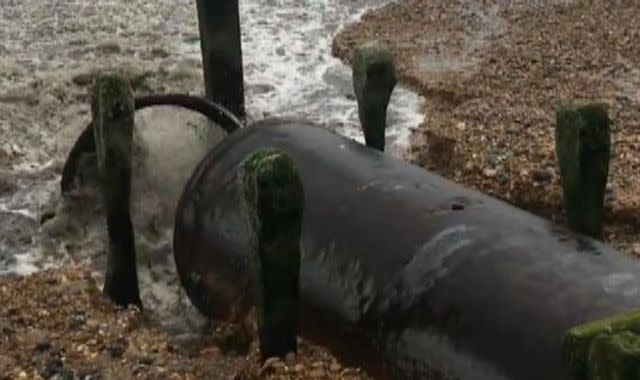 Water companies have been accused of failing to monitor the amount of sewage discharged into the sea.

According to Environment Agency data analyzed by the Liberal Democrats, sewage monitors installed by UK water companies were either not working ‘90% of the time’ or had not been installed at all.

Dozens of pollution warnings have been put up at beaches and bathing spots in England and Wales this week after heavy rain overwhelmed sewage systems, leading water companies to discharge the wastewater into the natural environment.

Ministers are under pressure to crack down on water companies which are being criticized for failing to plow money back into the UK’s outdated water infrastructure.

Data shows Anglian Water has the highest failure rate, with 49% of all its waste water discharges going unmetered due to faulty or non-existent monitors, according to the Lib Dems.

One in eight of South West Water’s sewage monitors installed at designated bathing spots across Cornwall and Devon are faulty or not installed, the party said.

In Sussex, Southern Water was found to have been completely unsuccessful in installing one at the popular seaside site of Littlehampton Pier, while one in Seaford only worked a third of the time.

“This is a national outrage and these new figures reek of cover-up. UK seaside resorts are flooded with sewage, but the government is nowhere to be found.”

In response to this issue, the Department for Environment, Food and Rural Affairs released a response earlier this week outlining the action it is taking.

“We have made it clear that water companies’ reliance on overflows is unacceptable and that they must drastically reduce the amount of wastewater they discharge as a priority.

“This adds to the ambitious steps we have already taken, including the consultation on water quality improvement targets, which will act as a powerful tool to deliver cleaner water, pushing all water companies to go further and faster to repair overflows.

“Work to combat sewage overflows continues apace and we will publish our plan in accordance with the statutory deadline of September 1.”

A spokesperson for Anglian Water said: “After more than £300m of investment over the past decade, all but three of the designated bathing locations in our region are rated as good or excellent for bathing water quality, and all are equipped with EDM monitors.

“Work to install EDM monitors on all CSOs (Combined Sewer Overflows) in our region is ahead of schedule as part of our National Water Industry Environment Program, as agreed with the Environment Agency.