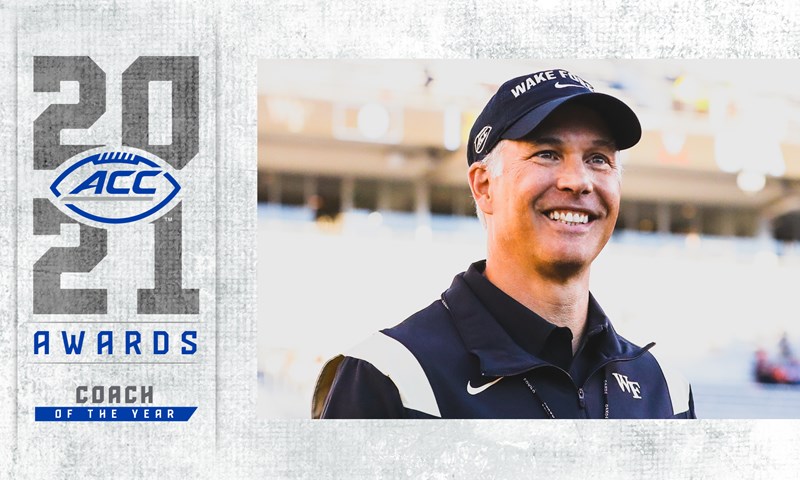 GREENSBORO, North Carolina (theACC.com) – Dave Clawson of Wake Forest was voted Atlantic Coast Conference Coach of the Year after leading the Demon Deacons to 10 regular season wins, the Atlantic Division title and a berth in the Championship Football game Subway ACC from Saturday.

Clawson, in his eighth season at Wake Forest, was the choice of 49 voters from a 64-member panel of 50 selected members of the media and each of the league’s 14 head coaches. Pat Narduzzi, who led Pitt to the Coastal Division title and will face the deacons in Saturday night’s championship game in Charlotte, placed second with 10 votes.

Wake Forest finished the regular season 10-2 overall and posted a conference record of 7-1 after being selected for a fifth place finish in the Atlantic Division in the league’s preseason media poll. The Demon Deacons, who did not receive a first-place vote from any of the 147 voters in the preseason poll, opened the season 8-0, placed in the top 10 nationally and took the bowl eligibility for the sixth consecutive season.

Wake Forest has placed eight players in the 2021 All-ACC teams and is heading into the third Subway ACC Football Championship game among all FBS teams scoring with 42.9 points per game.

This is the ninth time that a Wake Forest head coach has been honored as the ACC Football Coach of the Year and the first since Jim Grobe led the Demon Deacons to the 2006 conference title. Clawson, who holds a 50-47 cumulative record at Wake Forest, is one of five head coaches in program history to have a winning record during his tenure at the school and the first since DC “Peahead” Walker (77-51-6 from 1937-50).

The distribution of votes for the 2021 ACC Football Coach of the Year:

Coach of the Year